Professional Wednesday: A Rant About Rejections and Quitting 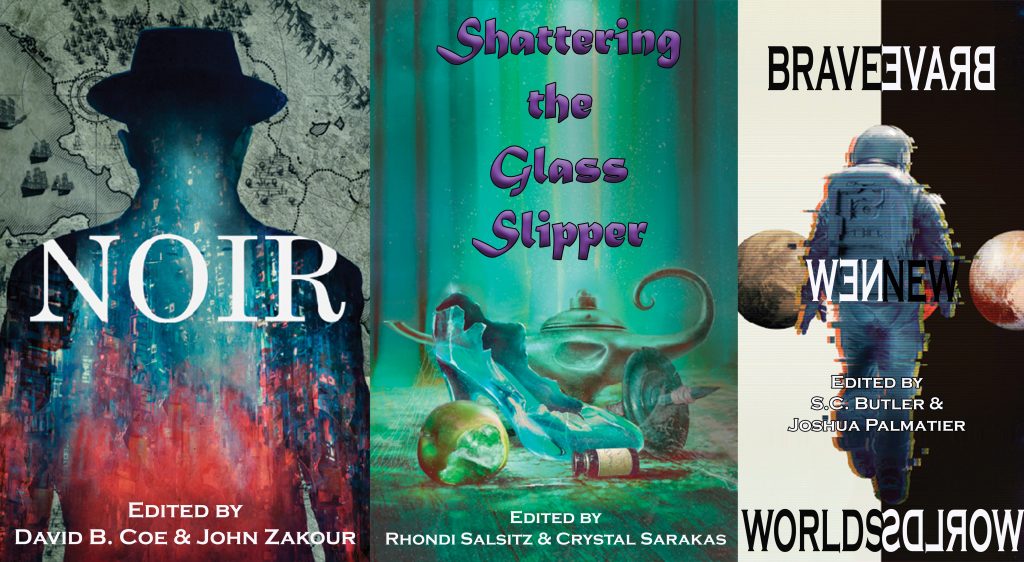 As many of you know, I am once again co-editing an anthology for Zombies Need Brains, Joshua Palmatier’s speculative fiction imprint. This is my fourth year as a co-editor, and each year Joshua follows pretty much the same approach to publishing his themed anthologies. Each collection has about fourteen story slots. He chooses a set of eight or so anchor authors for each volume and runs a Kickstarter to fund all the anthologies, using those anchor author names to attract support for the projects. Once the anthologies have funded (and Joshua has a remarkable success rate with his Kickstarters) he throws open the anthologies for general submissions, having reserved six story slots in each collection for non-anchor stories. He pays professional rates for the stories, and he puts out sleek, well-curated, well-edited books.

This year the three anthologies are Shattering the Glass Slipper, Brave New Worlds, and my anthology, Noir. Joshua is co-editing only one of the anthologies, a bit of a change from past years when he has nearly killed himself editing two or even all three of the books. We get literally hundreds of submissions for each anthology, making the selection of six (or five or seven) stories incredibly difficult.

As the publisher, Joshua takes it upon himself to send out acceptance letters and also rejections. Of course, he also handles the contracts and payments. His is a somewhat thankless job.

Most years, the rejection letters are met with either silence from the rejected authors, or, on occasion, with a “Thanks for considering me, maybe next time” note in return. This year was much the same. Except for one note he received:

In it the author said they had decided that if their story was rejected this time around, they would give up on submitting anywhere. And then they congratulated Joshua for killing their nascent writing career.

This is so wrong on so many levels, I hardly know where to begin.

First of all, Joshua is as nice a person as you could ever hope to meet. He doesn’t deserve this shit from anyone, much less a thin-skinned writer wannabe who doesn’t know anything about writing or the publishing business. (More on that in a moment)

I should also say that Joshua is a class act. He told his editors about the letter, but he didn’t tell us the author’s name or which anthology the story had been submitted to. I have no idea if I read the story. I do know there is a good chance Joshua had nothing to do with the story’s rejection. Even if the story in question was submitted to the anthology he’s co-editing, the rejection would have been a joint decision between Joshua and his editing partner. Mathematically speaking, it’s more likely that another pair of editors rejected the story. Joshua was simply delivering the bad news in his capacity as publisher.

But in a way, that ignores the galaxy of larger issues raised by this note. None of us editors is responsible for killing this person’s writing career. The author of the story is solely responsible for that. They are the one who chose to base their writing future on the fate of one story. They are the one who decided that one more rejection would be enough to make them give up. This was not a career murder. It was literary suicide.

A moment ago I called this person “a thin-skinned writer wannabe who doesn’t know anything about writing or the publishing business.” Maybe that sounds harsh. Too bad.

Writing is hard. Rejections are part of the business. I have been writing for more than a quarter century. I’ve published more than twenty-five novels and at least that many short stories. I have won awards, been a convention guest of honor multiple times, had fabulous reviews. And I still have my work rejected all the time. It. Is. Part. Of. The. Business. Yes, rejections suck. And upon receiving one I give myself a bit of time to be upset, angry, sad, whatever. An hour, maybe two. If it’s a big project and a publisher I really wanted to work with, I’ll give it a day. Then I pull up my big-boy panties and get back to work.

That’s what professional writers do. Chances are if you’re reading this, you’re a writer. You’ve been rejected. You’re still working. Good on you. That’s what you’re supposed to do.

The author of that obnoxious note has obviously not enjoyed much success as a writer. It’s pretty clear that this was the culmination of a string of rejections. I’m sorry for them. Truly. As I say, rejections suck and a bunch of them can be discouraging. And I can even see where, if these rejections have been spread over a span of several years, that could be enough to make this person give up. It’s almost enough to make me sympathetic. Almost. Because then we come back to the part where this person blames Joshua for ending their career.

Look, writing is not for everyone. Maybe you’re reading this having just been rejected yourself. Maybe you’re thinking of getting out of the business as well. I would say to you two things. First, try to remember that a rejection is not always a final judgment. Sometimes it’s a step in a creative negotiation, an indication that your story just needs a bit more work, a bit more polish, a tweak of a character or plot thread. Sometimes it has nothing to do with the quality of your story and everything to do with the other stories in the anthology and the particular slot in the collection the editors wish to fill.

Whatever you choose, remember this: No one can make you quit but you.

Keep writing. Or don’t. But take responsibility for that choice.