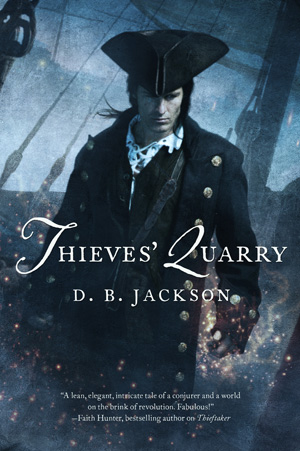 Autumn has come to New England, and with it a new threat to the city of Boston. British naval ships have sailed into Boston Harbor bearing over a thousand of His Majesty King George III’s soldiers. After a summer of rioting and political unrest, the city is to be occupied.

Ethan Kaille, thieftaker and conjurer, is awakened early in the morning by a staggeringly powerful spell, a dark conjuring of unknown origin. Before long, he is approached by representatives of the Crown. It seems that every man aboard the HMS Graystone has died, though no one knows how or why. They know only that there is no sign of violence or illness. Ethan soon discovers that one soldier — a man who is known to have worked with Ethan’s beautiful and dangerous rival, Sephira Pryce — has escaped the fate of his comrades and is not among the Graystone’s dead. Is he the killer, or is there another conjurer loose in the city, possessed of power sufficient to kill so many with a single dark casting?

Ethan, the missing soldier, and Sephira Pryce and her henchmen all scour the city in search of a stolen treasure which seems to lie at the root of all that is happening. At the same time, though, Boston’s conjurers are under assault from the royal government as well as from the mysterious conjurer. Men are dying. Ethan is beaten, imprisoned, and attacked with dark spells.

And if he fails to unravel the mystery of what befell the Graystone, every conjurer in Boston will be hanged as a witch. Including him.

Thieves’ Quarry is the second volume in the Thieftaker Chronicles, the critically acclaimed historical fantasy series from D.B. Jackson. Combining elements of traditional fantasy, urban fantasy, mystery and historical fiction, the Thieftaker books are sure to appeal to readers who enjoy intelligent fantasy and history with an attitude. Thieves’ Quarry is available from all booksellers, and can also be found e-book and Audio formats.

The book can be purchased from these book sellers: