A Plunder of Souls 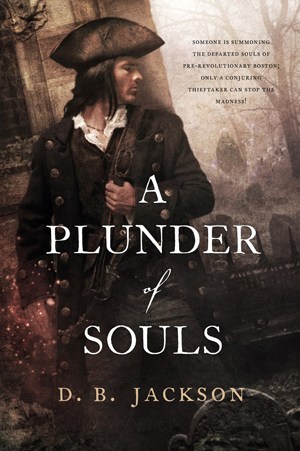 New England is in the throes of a sweltering summer. The distant rumble of thunder offers the promise of rain, but the air remains still, oppressive, rank. And an outbreak of small pox has thrown the town of Boston into panic. The distemper is spreading through the streets; people are dying.

Before long, Ethan realizes that the grave robberies have not been committed by ghoulish thieves. Rather, they are the work of a powerful conjurer, one who is mutilating corpses, gathering an army of wraiths, and, through his foul trespass, directing his spells and his scheming at Ethan himself.

Worse, this conjurer is known to Ethan: a vengeful, twisted enemy from his past, who has found a way to enhance his own conjuring abilities while denying other conjurers access to their spellmaking powers. More in need of his conjuring talents than ever before, Ethan finds himself unable to cast, unable to fight, unable to defend himself.

With every new death in a city beset by a mortal disease, this conjurer becomes more powerful and adds to his legion of ghosts. And if Ethan cannot find a way to defeat him, every man and woman in the city will be at the villain’s mercy.

A Plunder of Souls is the third volume in D.B. Jackson’s historical urban fantasy series, the Thieftaker Chronicles. Combining elements of traditional fantasy, urban fantasy, mystery and historical fiction, the Thieftaker books are sure to appeal to readers who enjoy intelligent fantasy and history with an attitude. A Plunder of Souls has just been released by Tor Books in hardcover, ebook, and audio formats.