Monday Musings: A Planet In Its Death Throes

Pray for the forest, pray to the tree,
Pray for the fish in the deep blue sea.
Pray for yourself and for God’s sake,
Say one for me,
Poor wretched unbeliever.

This is what it looks like when a planet dies 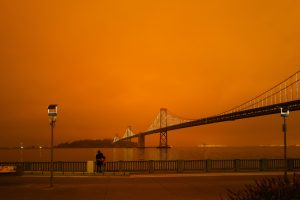 Cataclysmic fires along the American West Coast and the Australian East Coast, in the Amazon and on the Steppe. Once-in-a-millenium events occurring annually. Orange skies over California and the Pacific Northwest.

Deepening cycles of drought and flood. Cities across the world literally being inundated by oceans and seas. Glaciers vanishing faster than even the most aggressive projections told us they would. Coral reefs dying. Species going extinct.

My older brothers turned me on to birdwatching when I was seven years old — a gift that has enriched my life for half a century. And over those same fifty years, North America’s population of birds has declined by nearly 30%. Habitat loss, pesticide use, careless architecture, and, yes, climate change — all have played a role. The result? Three billion fewer birds.

In the spring of 1985, my senior year in college, I took an ecology course for non-majors. It offered a survey of critical environmental issues facing the world, and discussed them in terms history and literature majors could understand. At the time, a scientific consensus had long-since formed around what was called at the time “the Greenhouse Effect,” what we later called global warming, and now global climate change. That was thirty-five years ago.

In 1896, a Swedish scientist named Svante Arrhenius theorized that the unfettered burning of fossil fuels, and the resulting release of carbon dioxide into the atmosphere, would lead to a warming of the planet. Four years later, in 1901, his colleague, Nils Gustaf Ekholm, coined the term “Greenhouse Effect” to describe the phenomenon. In fairness, Ekholm thought it might be a good thing, as it would stave off future ice ages. But the concept is not a new one.

For decades, global temperatures have been rising to record setting levels, only to be topped the following year. Global temperature records were first kept in a systematic way around 1850. Of the 170 or so years for which figures exist, nineteen of the twenty hottest have occurred since 2000. 2020 is on pace to join the top five.

I am willing to engage on most political and social issues. I enjoy a good discussion, a vigorous debate. There are, though, a few topics on which I will no longer engage. First among them is bigotry of any sort — racism, sexism, homophobia, trans bias, religious bias, etc. Climate denial is a close second. (And this year, Covid denial has joined the list.)

This is no longer theory. It hasn’t been for a long, long time. Climate change is real. Our planet is dying. If we do nothing — if we as a global community continue on the path we’re on now, we will bequeath to our children and grandchildren a burnt husk of what was once earth. Future generations will live in a world that staggers from ecological crisis to ecological crisis, from catastrophe to catastrophe, from flood to drought to famine to pandemic and back again.

We have had ample opportunity to address the issue, and we have squandered one after another. We have absented ourselves from vital global treaties and doubled down on the sort of short-sighted consumerism that got us into this mess in the first place. Like James Taylor in the song quoted at the beginning of this post, I have no faith in our ability to save ourselves. We are a society that cannot bring ourselves to wear cloth masks for the common good. How are we supposed to make the economic transitions necessary to change economic course?

And the tragic thing is, addressing climate change could be a tremendous boon to our standing in the world, to our economic fortunes, to our commitment to education. This is the challenge of our time. It demands bold thinking, new industries, innovation and invention. Implementing the necessary changes would generate hundreds of thousands of jobs, replacing and more the jobs lost in the coal and oil industries. Fitting ecological imperatives to our national love affair with cars and trucks could revitalize the American automotive industry. Does anyone really believe that the internal combustion engine, invented more than a century ago, is the be-all and end-all of technological ingenuity? Of course not.

But we have to have the will to change, the courage to say “Saving our planet for our children is worth whatever sacrifices we might have to make.” And, from what I can see, we don’t.

I wish I could end on a more hopeful note.