Professional Wednesday: What I Learned During a Recent Visit With Claude Monet

Last week, Nancy and I were traveling for her work, and we had the opportunity to spend a day and a half in New York City. We had dinners with our older daughter, we attended some university functions, Nancy had finance meetings, and I had part of a day to myself.

As I have mentioned here recently, I am trying to figure out where to go with my writing. (And allow me to take this opportunity to thank those of you who weighed in with opinions about what project I should take on next. Many of you want to see continuations of existing series — Thieftaker was the most popular request, followed by Fearsson and Radiants. Not surprisingly, the new project I mentioned as a possible choice received little love. The unknown is bound to attract less notice. But the most heartening element of the responses I received was the repeated assurance that you would welcome and read whatever I choose to tackle going forward. And for that, I am grateful beyond words.)

As I continue to grapple with this decision, I thought I might find inspiration in art, and so, on a bright, crisp Monday morning in New York City, I walked north along Fifth Avenue to 83rd Street and the grand entrance to the Metropolitan Museum of Art. I didn’t know precisely what I sought in the museum, but I trusted the instinct that drove me there. Much the way our bodies sometime crave certain types of food — salty snacks, or protein rich foods — so I believe our brains can crave input of a specific type. I felt a strong need to look at the beauty of creative endeavor.

Specifically, I wanted to see the work of the Impressionists and Post-Impressionists. Degas, Manet, Morisot, Cezanne, Pissarro, Cassatt, Van Gogh, Gauguin, and my favorite, Claude Monet. As a historian (and a camera bug), I find the development of Impressionism (in the latter third of the nineteenth century) fascinating. It coincided with the invention and popularization of photography. Suddenly, artists were freed from the need to create images that were accurate and lifelike. A photograph could do that. Instead, artists could begin to experiment with color, with light and shadow, with texture, with the self-conscious use of brushstroke and palette knife. 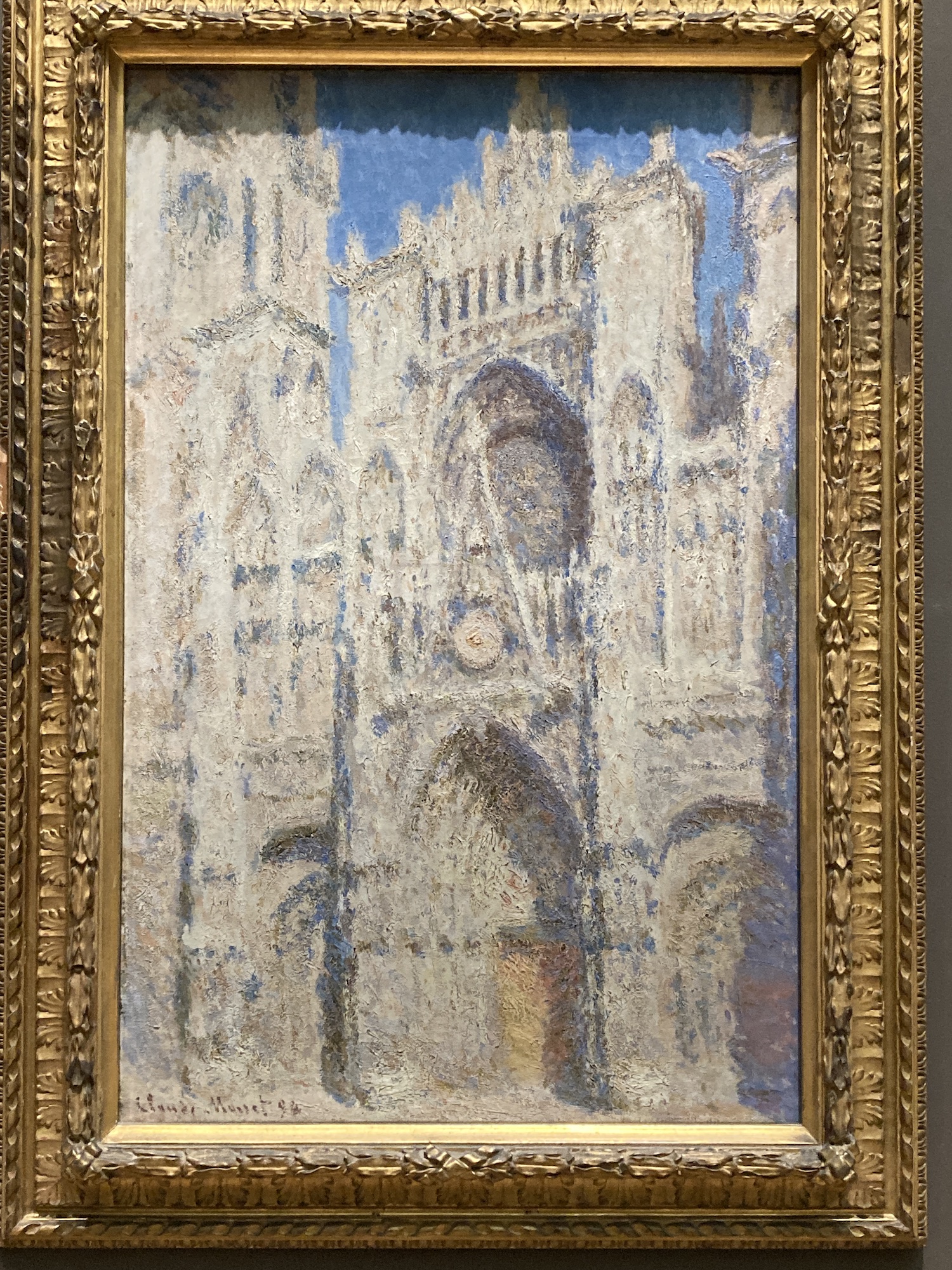 Monet was fascinated in particular with the way light and color changed from hour to hour, day to day, season to season. He painted series after series, experimenting with images of the same subject matter painted at dawn and dusk and midday. Haystacks on farms, poplar trees in the French countryside, water lilies, the Houses of Parliament and Charing Cross Bridge in London, and two of my favorite series: the façade of the Cathedral at Rouen, and the Japanese footbridge and pond at his home in Giverny. 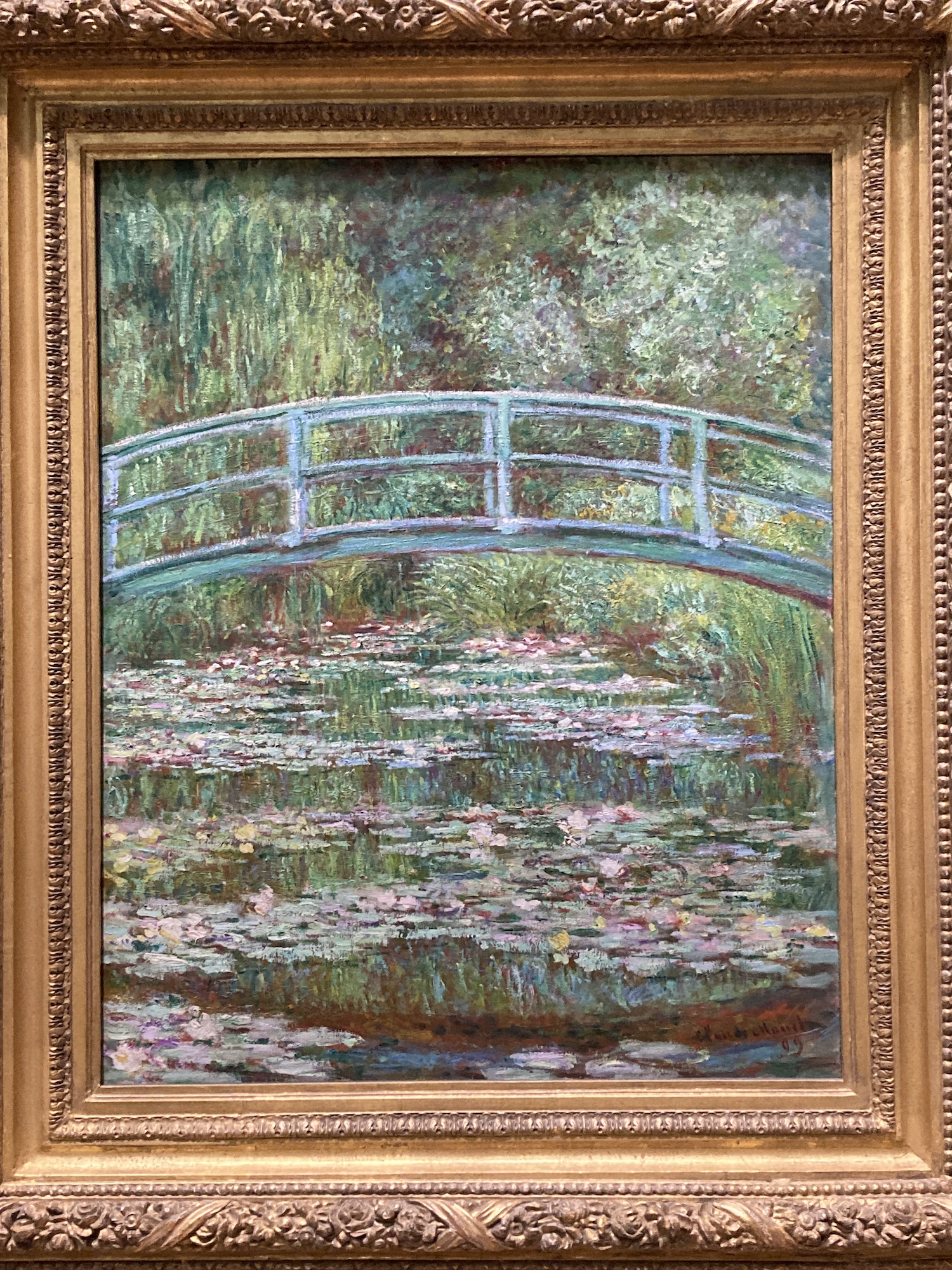 Seeing these paintings last week filled me with joy, with a sense of calm and contentment. It was glorious. I lingered in the museum for hours longer than I had intended to.

But what does this have to do with writing? Why would it warrant discussion in a Professional Wednesday post?

Honestly, I am still trying to figure out the answers to those questions. But I think it comes down to this: Creativity demands that we reexamine those things we have taken for granted, the things we have accepted as routine. The daily dance of light across the front to a building, the shape and forms we see each day. But creativity also asks that, on occasion, we rethink everything about our art. Imagine having been trained as a classical artist in the mid-nineteenth century, only to have every assumption about visual art overturned by the invention of a light-capturing box.

In the course of my lifetime (and I’m not THAT old . . .), we have sent spacecraft beyond the pull of earth’s gravity and out to the edges of our solar system. We have created lenses capable of peering through space and time to the very beginnings of our universe. We have replaced the rotary phones that were wired into our homes with untethered devices that take pictures, monitor our finances, store our music, and handle computational tasks that used to challenge machines so big they needed to be housed in warehouse-sized spaces.

We have seen the impossible become consumer-ready, the fantastical turned mundane. And as storytellers, we have had to stretch to come up with ideas that will surprise and captivate and satisfy. That stretch doesn’t necessarily imply pursuit of the increasingly outlandish. Rather, I would argue, it has forced us to reconsider simplicity, to infuse the familiar with qualities that make us marvel or recoil.

And as I search for my next spark of inspiration, I find myself wondering what will be for me the literary equivalent of watching color and shadow transform a garden pond and the reflections of a footbridge. Once upon a time, I worried that I would run out of ideas for stories, that I would complete a series, only to discover that it was the last one, that my creative well had run dry. Now, as I approach the big Six-Oh, my fear is that I will run out of time before I have completed all the tales I wish to write. I’m don’t worry about failing to find a new idea; I worry about choosing the wrong one and wasting time on something I don’t love.

Late in his life, Monet began to lose his sight. And still he worked, learning to create images of power and beauty and drama despite seeing color and form with less clarity. Creativity finds a way. Inspiration carries us past obstacles both physical and emotional.

Maybe, ultimately, that was the reminder I needed when I stepped into the Met. I still don’t know what I’ll be writing next. I do know that the challenges in my life have not gone away and won’t anytime soon. But I am a creator, and I still crave inspiration. So, I will consider, and I will settle on a project, and I will share with you the stories that stir my passions.

And I wish you the same.