Professional Wednesday: Most Important Lessons — Trust Yourself, Trust Your Reader

We are coming up on the 28th anniversary of the start of my career (which I trace to the offer I received from Tor Books on Children of Amarid, my first novel). To mark the occasion, I thought about doing a “lessons I’ve learned” post. I quickly realized, though, that I could write 20,000 words on that and still not exhaust the topic. Better then, to begin this series of essays, which I will return to periodically, as I think of key lessons that I’ve learned about the business and craft of writing.

I’ve chosen to start with today’s lesson — “Trust Yourself, Trust Your Reader” — because it’s one I’ve found myself repeating to writers a lot as I edit short stories for the Noir anthology and novel length projects that come to me through my freelance editing business. 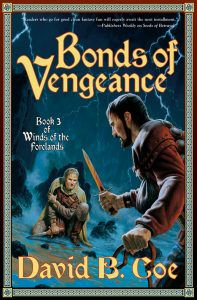 Honestly, I think “trust yourself” is good advice for life in general, but for me, with respect to writing, it has a specific implication. It’s something I heard a lot from my first editor when I was working on my earliest series — the LonTobyn Chronicle and Winds of the Forelands.

Writers, and in particular less experienced writers, have a tendency to tell readers too much. Sometimes this manifests in data dumps, where we give way more information about our worlds or our characters than is necessary. And yes, that can be a problem. I have no doubt that in future “Most Important Lessons” posts, I will cover world building, character, and ways to avoid data dumps.

For today’s purposes, though, I refer to a different sort of writing problem that can be solved simply by trusting our readers and trusting ourselves. As I said, writers often tell readers too much. We explain things — plot points, narrative situations, personality traits. And then we tell them again. And again. And as we build to our key narrative moments, we give that information yet again, wanting to make certain that our readers are set up for the resolutions we’re about to provide.

There are several problems with doing this. First, it tends to make our writing repetitive, wordy, and slow. Nobody wants to read the same information over and over. It’s boring; worse, it’s annoying. Second, it forces us to hit the brakes at those moments when we should be most eager to keep things moving. If we’re explaining stuff as we approach the climactic scenes in our stories, we are undermining our pacing, weakening our storytelling, robbing our stories of tension and suspense. And third, we are denying our readers the pleasure of making connections on their own. We are, in a way, being like that guy in the movie theater revealing key moments in the film right before they happen on screen. And everyone hates that guy.

In other words, we have to trust that we have done our jobs as writers.

Trusting our readers means trusting ourselves. Readers are smart. They pay attention. They read our stories and books because they want to. Sure, sometimes they miss things. Sometimes they skim when they ought to be paying attention. As a reader myself, I know that I am not always as attentive as I ought to be. But I also know that when I sense I’ve missed something important, I go back and reread the sections in question. Your readers will do the same.

“But,” you say, “what if I haven’t done those things? Isn’t it better to be certain, to tell them more than they need to know, so that I can be absolutely sure they get it?”

It would seem that way, wouldn’t it? But that’s where trust comes in. Sure, there is a balance to be found. We don’t want to give our readers too much, but we don’t want them to have too little, either. And the vast majority of us fear the latter far more than the former. We shouldn’t. Again, readers are pretty smart. If the information is in the book, they’ll make use of it. Better, then, to trust, to say, “It’s in there. I’ve done what I could, what I had to. I am going to trust that I did enough.”

Yes, the first time or two, we might need to revise and give another hint here or there. But generally speaking, when we trust our readers — when we trust ourselves — we avoid far more problems than we create.