I will admit that my first impulse for this Monday Musings post was to write about something other than race and politics. Not because those things aren’t still on my mind. They consume me. But rather because I was thinking, “I’ve written about White privilege two weeks in a row. I don’t want to seem like I’m harping on it.” [Here are links to my post from two weeks ago and last week.]

My next thought, right after that one, was, “Why the hell not?” 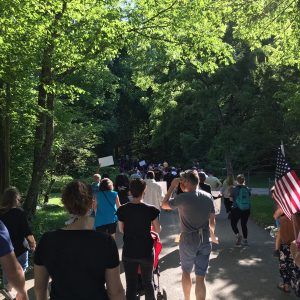 This past Friday our little college town had a peaceful protest march followed by a rally on the college quad. It was a terrific event: somber, but also uplifting. Several people spoke, including my wife, who is provost of the university. Most of the speakers were Black; Nancy is not. And her message was directed at the many White allies who were in attendance. Showing up is great, she said. But it’s not enough. We who consider ourselves allies of those fighting for racial justice, but who also carry enormous privilege, have to challenge ourselves to act, to fight every day for a better world. And she, in turn, challenged us. Think of things you can do. Commit yourselves.

She and I have been making donations to organizations that fight for racial justice. We are committed to voting, to supporting candidates who will help put an end to systemic racism. We have reached out to our Black friends to make sure they’re doing all right. We are more than willing to have difficult conversations with family and friends. We would be willing to have those conversations with our daughters as well, but, frankly, we have more to learn from them than they have to learn from us.

But after those things, I found myself wondering in response to Nancy’s challenge, what else I could do? The answer came to me pretty quickly; it should be obvious to anyone who knows me.

That’s what I do.

I’m not saying that race and racial politics will be the subject of every Monday post for the rest of time. But one of the great problems with American politics is that we as a nation have no attention span at all. We become obsessed with the issue of the day, the tragedy of the week – a mass shooting prompts calls for serious conversations about gun control. Until the next police shooting exposes for the thousandth time the need for a meaningful conversation about race. Until the next ridiculous or outrageous Tweet from the Infant-In-Chief prompts renewed obsession with the campaign and the latest polling numbers. Until a new spike in Covid-19 cases reminds us of the devastating toll the virus is exacting. Rinse, repeat. Rinse, repeat. Rinse, repeat.

My thoughts about this post are symptomatic of that short attention span. Two weeks in a row writing about race? Yikes! Time for another post about my five favorite rock ‘n roll albums.

And more to the point, that short attention span is an expression of privilege. I have the luxury of being able to turn away from the conversation about systemic racism if I want to, because I’m White. Because I don’t have to worry that my next traffic stop could prove fatal. Because while the unemployment rate among my people is high, it’s not at 16.8%, as it is for Blacks. Because my health care is affordable and readily available.

I can eventually look away after the next shooting sparks a new debate on guns, because while gun violence should concern all of us, Blacks are (according to the Giffords Law Center) ten times – TEN TIMES – more likely than Whites to be murdered with a firearm.

We in the White community can afford to lose interest, to get distracted, to move on to other issues. But we, as White allies in the struggle for racial justice, can’t. Just this weekend in Atlanta, Rayshard Brooks was shot and killed by Atlanta police in an incident that began with him sleeping in his car. I guarantee you, that is a sentence that has never been written about a white man.

And so, yes, I am writing about race again. Because once we open our eyes to the prevalence of bias and bigotry and harmful stereotypes (and it is another expression of lifelong privilege that we have the choice of whether or not to do this) we can find them everywhere. The only way to avoid them is to ignore them, or to be utterly oblivious. Race creeps into everything. The next time you’re watching TV, pay close attention to the commercials. Look at how race is treated. Watch for the racial sub-narratives. Be attuned to the archetypes. Once you start to see them, you can’t stop. Listen to sports commentary (if and when we ever get to watch sports again). Pay attention to the adjectives used to describe White and Black players. How many times are Whites referred to as “hard workers”? How many times is Black success credited to “natural athletic ability”?

“Why,” we hear people ask, “do they have to make everything about race?”

And the answer is, because people of color in this country – and throughout much of the world – inhabit a different reality from the one we Whites live in. In their world, racism is omnipresent. It is unavoidable. It is the knee on the neck. Being an ally means looking and seeing, listening and hearing, discussing and speaking out. It means answering my wife’s challenge by pushing ourselves outside of comfort and complacency, and committing ourselves.

And for me, it means writing.

Wishing you a wonderful week.