“Creatures of the Streets…” 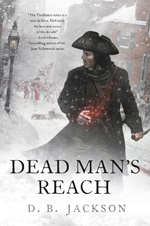 The idea of writing historical fiction is to embed something imagined — a story — in something historically accurate. The novels of the Thieftaker Chronicles (Thieftaker, Thieves’ Quarry,  A Plunder of Souls, and Dead Man’s Reach) and the short stories set in the Thieftaker “universe” use actual events from Boston’s pre-Revolutionary period — the fire of 1760, the Stamp Act Riots, the occupation of Boston, the Boston Massacre, even a small pox outbreak — as the backdrops for stories of magic and murder.

But the Ethan Kaille books also begin with a fairly significant historical fallacy. 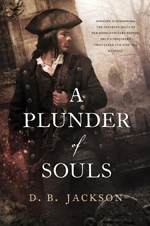 Thieftakers did exist. They were fairly common in London and other English cities in the eighteenth and early nineteenth centuries. In essence, they were the historical ancestors of today’s private investigators. When men of means lost property to thievery, they sometimes turned to thieftakers who recovered the stolen items for a fee. But that fairly simplistic description of a thieftaker’s job obscures the fact that many who plied this trade were themselves . . . well, let’s just say that they weren’t always the most honest men in town. 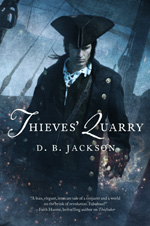 Perhaps the most notorious thieftaker was a man named Jonathan Wild. For about seven years, from 1718-1725, Wild built a criminal empire in London while presenting himself to commoners and city leaders alike as the kingdom’s greatest protector of property. He headed a ring a thieves who stole from London’s wealthy and then passed the goods to him, so that he could return them for his fee. When the thieves under his command became liabilities, or rivals, he turned them in and collected rewards for their “capture.” He was ruthless, cruel, violent, brazen — in short, the perfect model for the character of Sephira Pryce, the so-called “Empress of the South End,” in the Thieftaker books. 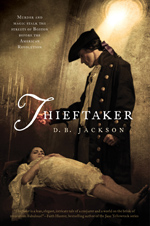 It wasn’t just that she was the most important thieftaker in Boston, in all of the American colonies. She was also responsible for much of the thieving and violence that made thieftaking necessary. At least half the gems and jewelry and other riches she returned for reward were first stolen by men in her employ. She took with one hand, gave back with the other, and was paid handsomely for doing so.
Those like Ethan, who lived their lives in the streets, saw the woman for what she really was: a charming, clever villain. But to the unsuspecting, particularly the wealthy, she was the person who kept Boston’s streets safe. And by dint of having forged this reputation, she had built an empire for herself. For if she profited from her efforts to keep order in the city and see to it that stolen property was restored to its rightful owner . . . well who could begrudge the woman a bit of coin? [Thieftaker, by D.B. Jackson] 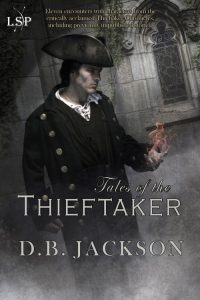 There were honest thieftakers as well, men like Ethan Kaille, who tracked down criminals and returned stolen items to their rightful owners. But they would have coexisted uneasily with their less reputable colleagues, just as Ethan does with Sephira.

The thing is, thieftakers, while common in the Old World, were almost unheard of in the North American colonies and the fledgling United States. The lack of any established police force in Boston in the 1760s makes it plausible that thieftakers could have been active at that time, but it is a historical conceit that they actually were. Of course, Ethan Kaille is not only a thieftaker, but also a conjurer; this is historical urban fantasy, after all. The historical elements — the politics, many of the events that form the setting for the Ethan Kaille mysteries, some of the personalities one encounters along the way — are accurate. But ultimately these are novels, and are intended to be enjoyed as such.